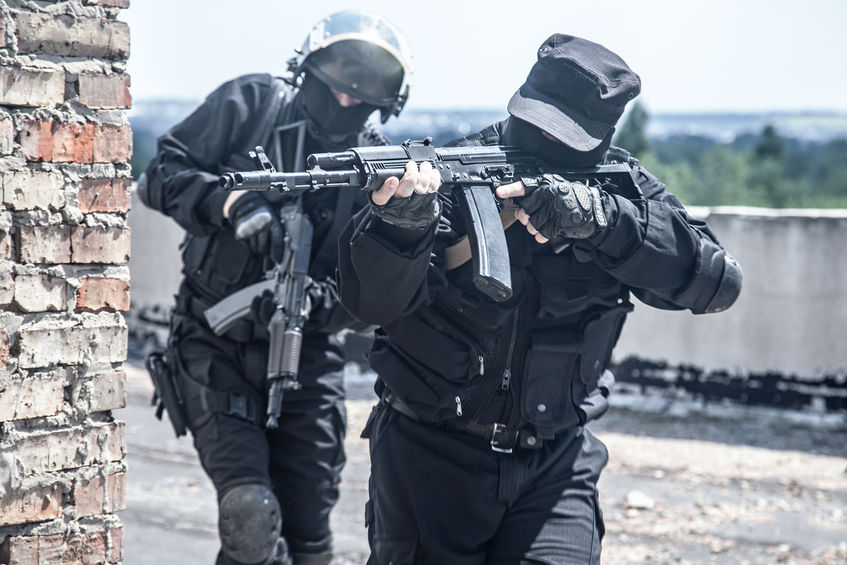 What does SWAT mean?

SWAT stands for Special Weapons and Tactics; a team of law enforcement officers who are equipped with specialized skills, equipment, and tactics.

SWAT teams were created in the 1960s, teams of specialized officers who were, at that time, tasked with the challenge of handling dangerous riots or confronting vicious criminals who posed a distinct threat.

Since the 1980s, SWAT team numbers have increased. With new and emerging challenges – such as the War on Drugs and Islamist terrorism – more specialized teams were needed to confront these growing threats.

SWAT teams are not rarely deployed, either. In fact, SWAT teams are deployed over 50,000 times a year. Often, this is to carry out search warrants – often in cases where dangerous narcotics are involved.

The primary function of SWAT teams is to protect members of the public from dangerous threats. Many of these threats exceed the standard capability of traditional law enforcement or investigative units. It takes considerable training and specialization to become a member of a Special Weapons and Tactics team, something which we flesh out in more detail below.

First, though, let’s take a few minutes to learn more about what SWAT teams do, and what specialist equipment and defensive measures are available for deployment.

What do SWAT teams do?

What would typically happen is that local law enforcement would create a perimeter around the suspect and wait for the SWAT team to arrive to enter and neutralize the threat. However, given the proliferation of mass shootings in the United States, local police departments have now developed their own protocols and training to handle these situations as and when they occur.

However, that doesn’t take away from the exceptional work that SWAT teams do, nor the considerable danger they place themselves in for the wider safety of the general public. SWAT teams form the backbone of law enforcement in the United States – protecting the public from the most serious threats by deploying specialist equipment, intelligence, and skills to neutralize these threats when they emerge.

To help SWAT teams achieve these goals, they are equipped with some of the most modern military and specialist equipment:

Defensive and tactical measures include:

Many people ask – what do SWAT teams do when they’re not in active duty?

First, it’s worth considering how SWAT teams are composed. Rather than being a separate force, most SWAT teams are instead pooled from the ranks of patrol officers, detectives, and other members of law enforcement – all of whom have been trained to the requisite standard. In this way, SWAT work is an addition to what they already do.

However, given the nature of what SWAT teams do, there is an immense amount of intense training required each month. When SWAT teams are not on active duty, each month they hone their specialist skills. This ensures that they are in peak condition as and when their skills are needed. As you can imagine, this requires a high degree of both physical and mental energy.

Teams are trained in specific ways. For instance, it’s not uncommon for one member of the SWAT team to have specific skills and responsibilities, and other SWAT team members to have other skills and responsibilities. What matters is that they are all coordinated. Coordination is essential. Each member is reliant upon the correct execution of what they are tasked to do.

How to Become a SWAT Team Member?

Many people who train to become a police officer have, as their ambition, a wish to become a member of a SWAT team one day. This is a noble ambition, but it’s also one that comes with immense competition. Not only must you excel far beyond what you believe is necessary, but you also need to have the steely determination to make it to the very top.

It isn’t easy, but it’s possible. If you are not sure how to become a SWAT officer, we have put together the perfect guide for you.

First, you need to become a police officer. This involves pass the police officer exam and the associated police interview test. Once you have made it through, you undergo intense training at the police academy. You are now a qualified law enforcement officer.

The next question is – how to make it onto the SWAT team?

Typically, police officers starting off require some experience, often at least 2-years’ experience. However, experience isn’t always enough. You need to perform to a high physical standard, much higher than that expected during the police test. You not only need to be able to handle tremendous physical strain but also intense mental strain and pressure, too. Remember, SWAT teams are elite law enforcement units. You cannot be fazed by physical and mental obstacles. Of course, if you wish to become a SWAT team member, you must undertake a grueling physical assessment to ensure you meet these high standards.

You will also be expected to demonstrate a high degree of proficiency with weaponry. You need to demonstrate that you can think on your feet – fast and agile – and achieve decisive goals in the face of an imminent threat to life. This requires courage and lots of it. Training to become a SWAT team member is tough and only the very best will make the cut. If, after reading this, you still believe that it is the ideal career for you, we recommend discussing this with your supervisor, or, if you have not yet become a police officer, to begin to prepare for the police officer exam.

That’s the very first hurdle you need to cover. Once that’s behind you, you can hone your skills as a police officer, perform your daily duties to the highest standards, and prove to the police department that you have what it takes to bring your career to the next level and become a member of SWAT; the elite law enforcement unit of the United States.