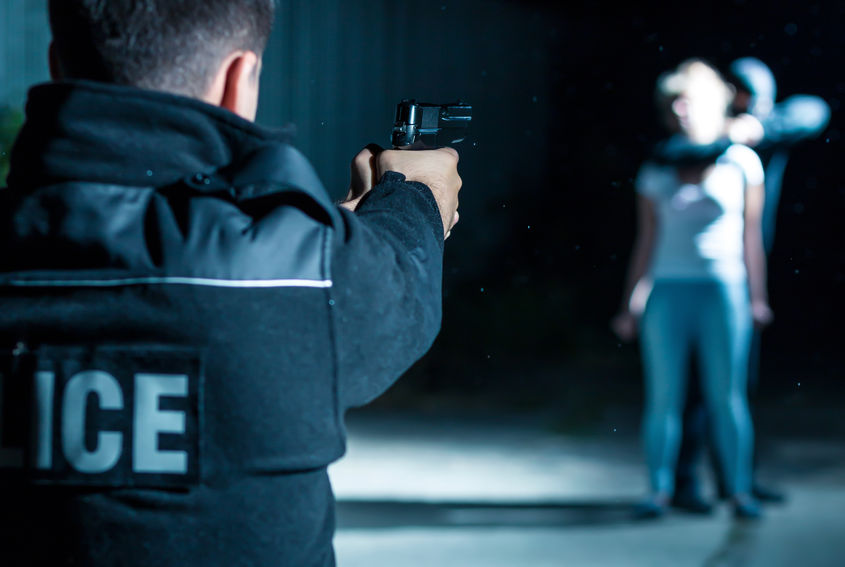 How do hostage negotiators get violent criminals to change their minds? Hostage negotiation techniques are savvy. Though they cannot be learned overnight, there are some key elements of each negotiation.

Passing the police test is the very first step on the way toward becoming a hostage negotiator for law enforcement. These are specialized officers who are trained in complex hostage negotiation techniques to bring an end to tense and often dangerous standoffs.

No matter what kind of tense negotiation you are handling, the techniques we discuss below can be applied across the board. We discuss broad principles of engagement that serve to bring the suspect to the negotiation table and come to a solution that minimizes damage.

All forms of negotiation require compromise and an ability to see things from the other’s perspective. Grasping the opposition’s strengths and weaknesses give you a unique vantage point through which you can begin to formulate a long-term, successful negotiation strategy.

The top 5 hostage negotiation tactics we discuss include:

By adopting and implementing these five core strategies, you can enhance your negotiation position and put the suspect where you need him to be.

# 1 – Actively Listen to the Hostage Taker

Listening is one of the most important negotiation techniques – at least to begin with. It may sound simple but it takes considerable skill to get this one right.

Hostage takers are easily influenced once they trust you. The question is – how do you build trust? The answer to that question involves actively listening to the hostage-taker – knowing what they want, why they want it, and what they expect from you.

Listening means not interrupting or disagreeing.

Remember, the hostage-taker is in a heightened state of mind. His life could, at any point, be taken. For these reasons, you cannot expect the hostage-taker to be a rational actor. If anything, he is more likely to be aggressive, irrational, and unable to weave together a coherent conversation. If something sounds off or offensive, don’t interrupt and evaluate it. It aggravates the suspect at a time when he is already acting irrationally.

Acknowledge what the suspect is saying. This can be achieved by using terse, non-judgemental acknowledgments such as:

If possible, repeat their line of thought back to them to show that you have been actively listening. Ask questions, too, to learn more about what the suspect is saying. As the conversation progresses, the suspect should become calmer because he is now not dealing with an obvious hostile force. Instead, he is dealing with someone who is trying to engage with their grievances – irrespective of whether those grievances are legitimate or not.

However, hostage negotiation techniques are not just about active listening. There is far more that needs to be done to take things to the next level.

Ultimately, as a hostage negotiator, you want the suspect to talk.

The only way to achieve that is to ask open-ended questions. Try to add some degree of understanding and/or empathy to the question asked – something we go into more detail below. For instance, this includes questions like, “That must have been difficult. How did things end up like that?”. The question is open-ended, and it offers some degree of understanding. It lacks any sense of pre-judgment.

An example of a poor, close-ended question would be, “Do you have many weapons with you?”.

It is a hostile question, closes the conversation down, and gives the suspect the impression that you care more about a seemingly inevitable violent confrontation rather than the concerns the hostage-taker is voicing.

Pauses are one of the most powerful hostage negotiation techniques. When you pause, you remain silent. When done properly, that pause influences the behavior of the suspect.

There are two kinds of pause: encouraging conversation and diffusing a situation.

By pausing at the right times, it encourages the suspect to continue talking to move the negotiation along. There are times when it is best to stay silent and allow the suspect to move the conversation along for you. By remaining silent, it adds pressure to the suspect. They are having a conversation with you, presumably because they hope to seek an outcome in their favor. They cannot stay silent. They have far more to lose in the long-term – and subconsciously they know this. Knowing when to pause takes practice. By pausing, you put the onus of conversation on the suspect and allow him to open up and navigate the conversation forward. Pausing is also used in the police interview test to encourage the interviewee to talk more about a given situation. It’s a simple, yet powerful tool.

Pausing is also effective at diffusing an emotional situation.

There may be times when the suspect considers you an active threat – and not someone in their interests. By simply going back-and-forth in conversation, it can elevate emotional distress. He may be stressed out for any other reason, perhaps by the compromised situation in which he now finds himself.

Staying silent can take temporarily take the heat out of the situation and allow things to exhaust back to the status quo.

Leveraging empathy is one of the most valuable hostage negotiation techniques.

It allows you – the hostage negotiator – to place yourself in the shoes of the suspect. Of course, the suspect could be rambling about something totally insane, but you cannot simply speak your mind. Instead, you must be “understanding” and tactful – and that requires a certain degree of both patients and empathy.

There are correct and incorrect ways to express empathy.

For example, a good example of empathy is, “That sounds pretty stressful. It wasn’t fair for that to happen to you.”. The statement is empathetic, understanding, and lacks judgment. It is a non-hostile acknowledgment of what the suspect has just told you.

A bad example of empathy is, “You shouldn’t be annoyed by that. There are plenty of other ways to handle the situation”. In this case, the response is negative and judgemental. It is telling the suspect that they shouldn’t have acted in the way that they have. It also demonstrates that you have no understanding of why they did what they did.

This kind of negative answer only serves to raise tensions in a negotiation.

Though this doesn’t seem obvious, one of the most powerful tools at the negotiator’s disposal is the ability to mirror the hostage-taker. One of the most common examples is paraphrasing.

For instance, repeat back to the suspect in your own words what they have said. Do not repeat their words verbatim. Instead, mirror back the meaning of their sentence in your own words. This adds another layer of understanding to the conversation. By returning the statement to the hostage-taker, it also provides pause and the chance for the suspect to think more about what they just said. That alone has the property of both diffusing a situation and moving the hostage negotiation along.

Second, hostage negotiators often repeat the last few words back to the hostage-taker. For instance, they may say, “This abuse has been going on for a long-time now, far too long”, to which you would reply, “Too long, huh?”.

Note that the hostage-taker has clearly said something that means something to him, something personal. When angry or frustrated, we like to share with others that great and burning sense of injustice. We take every opportunity to voice our frustration, whether that frustration is legitimate or not.

By returning, “Too long, huh?”, to the suspect, it gives them the opportunity they subconsciously yearn for to talk more about the injustice they feel has been exacted against them.

After you have passed the police officer exam and become a law enforcement officer, it can take many years of experience before you can qualify to become a hostage negotiator. However, with these hostage negotiation techniques, that ambition has just come one step closer.

Check back to Police Test Study Guide for more great content on hostage negotiations, criminology, and how best to deal with the most dangerous and delicate situations that law enforcement is trained to overcome!

How to Improve Reading Comprehension

Top 10 Police Officer Skills You Need to Have