Learn more about the police test
and becoming a police officer
with our extensive resources.

There are over 400,000 correctional officers in the Unites States.

They serve in county, state, and federal detention centers. 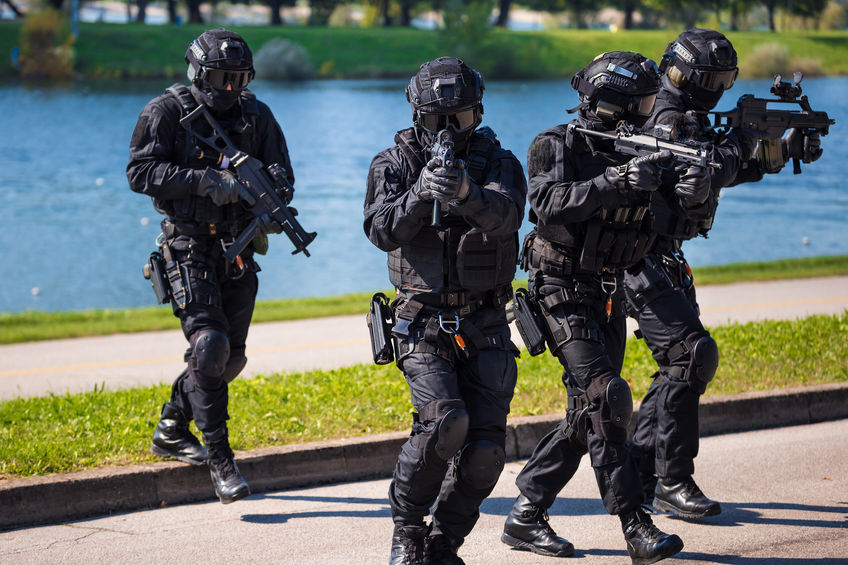 After you have passed the police officer exam, you can decide to become anything from a member of the SWAT team, to a K9 officer, or even as a special investigator. It depends on your ambition and experience. That said, the opportunities are there should you decide to take them.

Perhaps you haven’t yet decided which law enforcement career suits you best.

As there are so many to choose from, it’s always worth taking the time to learn more about what’s included and which one of these special law enforcement units overlaps with and matches your skillset best.

Here, that’s where we hope to help.

We are going to review some of the most common law enforcement careers that officers decide to join. And what better way to start than with the cute and the cuddly – yes, with dogs.

Of course, the clue is in the name – K9, or canine, referring to the use of dogs within law enforcement.

K9 officers are widely used in both small and large police departments. One of the great advantages of using dogs is their keen sense of smell. Research suggests that dogs have 300 million olfactory (smell) receptors in their noses. We humans just have a meagre 6 million. Put another way, dogs have 50-times greater sense of smell than we do. That’s not a small difference – and it’s a difference that law enforcement agencies exploit up and down the country.

K9 dogs assist in situations such as:

Their use is not limited to these three functions. K9 officers can also release dogs to pursue fugitives on the run. Dogs can also be used to inform officers of a direction in which officers should focus their attention.

K9 dogs are also pets. In fact, K9 officers can both train and live with their dogs – offering a dual-purpose role to the dog in both a personal and professional capacity. This makes becoming a K9 officer that little bit more tempting.

In the age of terrorism in which we live, bomb squad officers have become more and more invaluable in destroying any objects which may contain explosive material. This law enforcement career requires very specialist training.

Not all police departments in the United States have their own bomb squad. For smaller departments, its not uncommon for officers to refer this work to a nearby larger department. Not all departments have the same specialist equipment. Many of these explosive devices must be destroyed from a distance. This requires technology that can be directed to go in and perform the necessary duty, under the command of a bomb squad officer.

Competition for places is very high.

SWAT teams are called in to handle more delicate operations – typically far more challenging than standard police operations and those that require more specialist training. SWAT teams are one of those specialist law enforcement units that deal with cases such as narcotics, hostage-taking situations, and managing ongoing terrorist threats.

SWAT teams are equipped with some of the most modern military and specialist equipment, including armored vehicles, top-rate weapons, stun grenades, thermal/night vision equipment, and motion detectors.

They often work alongside police officers in the handling of a complex operation.

After you have passed the police officer exam and worked as a police officer for several years, you may then be qualified to undertake specialist training to join a member of a SWAT team.

Most police officers will engage in crowd control at some point during their work. There are specific techniques that officers are trained to implement to control large crowds and to prevent the spread and damage caused from riots. This is a team-work effort and requires constant on-going invigilation.

Both smaller and larger police departments handle riot and crowd control events. Riots may evolve from smaller events, such as a small protest, which then takes a turn for the worst and becomes violent.

Perhaps you are early in your career and haven’t yet thought about becoming an instructor or trainer for future police officers.

That said, you may find the career choice tempting in the future. After a few years’ experience as a police officer, you may be tasked to assist any new recruits that join the department. It will be incumbent upon you to teach them best practice and to help them become valued members of the department. Later in your career, you may decide to become a full-time instructor – working at the police academy to oversee the full training program of new recruits. In tandem with this, larger departments also have specialist recruiters – who are tasked with the duty of finding the very best officers to fill a growing need within the department.

For example – there may be situations in which traffic lights are not working. Add to this an accident that has befallen the area. This can lead to substantial traffic delays and increases the risk of further accidents as well as disputes and tension between and among drivers.

Traffic officers are trained to handle these delicate situations, to monitor any ongoing review of an accident, and to de-escalate any prospective tension between drivers – clearing up the backlog and allowing for the smooth transit of traffic throughout the zone.

One of the fastest growing special law enforcement units is the sexual offences unit.

In part, this is because of the Internet. More and more predators can now gain access to illicit material and to conduct conversations with children against consent – possibly even using smartphones to arrange meet-ups that may lead to the rape and torture and maltreatment of children.

The sexual offences unit is a specialized unit trained to handle these operations and to conduct the necessary intelligence manoeuvres to find and isolate those who violate the law and see to it that they are arrested and prosecuted. Furthermore, the sexual offences unit also handles adult cases of offence – including rape.

As the name suggests, mounted police officers are those who deploy the following modes of transport to carry out their daily duties:

Given the speed with which officers can conduct their duties, mounted police officers are often the very first officers to the scene of a crime or accident. Mounted officers perform the same kinds of duty as standard police officers but are required to use different forms of transport.

Some, such as horses, are an excellent means by which crowds can be controlled.

Many applicants who pass the police officer exam never think about the community aspect of their work. Police officers are more than just enforcers of the law, important though that role and function is.

Many police officers form the backbone of the local community. This is particularly true for smaller, remote departments – in which officers play an integral community function. Many people look to the officer from that angle. Many larger departments have community relations officers.

Their function is to mediate relations between law enforcement and the wider community. Many of these officers will have links with local schools, or community organizations and groups. Community relations officers have an important communicative role. You may have encountered one in high school. Many officers speak to classes to inform students as well as to highlight the need to mitigate any possibility of temptation to fall into criminality.

As such, many of these officers also work with juvenile cases and delinquents – attempting to put and end to and arrest their cycle of unlawfulness.

One of the most exciting specialist law enforcement units are those in aviation.

Not all departments have an aviation division. Typically, this is reserved for the larger departments in the country – many of whom oversee law enforcement duties within a much wider zone. It takes considerable training to become a qualified law enforcement pilot. It is not uncommon, therefore, to see former members of the military fall back into this kind of career. They have the training and considerable experience and so can easily meld into a police department. Some of these officers fly fixed-wing aircraft units whereas others are trained in helicopter provision.

The function of the aviation officer is manifold – for safety and protection purposes, to search-and-rescue operations in difficult to navigate terrain, as well as other more specialist needs – such as high-speed pursuits, upholding national security against an outside threat, and aerial surveillance and reconnaissance missions.

Marine and harbor patrol have much of the same kinds of duties that we have already discussed. As the name suggests, marine patrol involves the safe and effective use of marine transport – such as police boats and ships – to maintain law and order, as well as to assist in delicate operations: including search-and-rescue operations and ensuring that marine law is not violated across rivers, lakes, and other marine environments. Many officers who train in this speciality are also trained as scuba divers and have the requisite health and safety training to handle any accidents that may occur at sea.

The fastest way to prepare for the exam and get hired.